Great! You are in the right place then!

I am happy to announce that I am releasing a playable version of Pixel Art - Mash-Up.

The day has finally come where the community can participate in the testing phase.

The game is currently set up to be played endlessly. There are 2 levels, each with 10 waves of enemies on each level. Each wave has increasingly difficult enemies. When you are done with level 2, it will transition you back to level 1. You can continue playing until you die and the total waves you were able to survive will be added to your final score.

When you start the game you will start with only the ability to punch and block. When you defeat an enemy you will gain xp. When you level up your HP will be replenished and you will receive 2 skill points that you can spend to unlock new attacks and increase attack damage.

Every other time you level up your max HP will be increased. This will allow you to play a little more aggressively if you choose.

It can be played with a keyboard or a controller.

Things you can unlock:

Note: You can upgrade each attacks damage individually if you choose or you can increase crit chance and crit damage which will effect all your attacks. The choice is yours.

Note: After you select your new stats press the JUMP button to accept the changes and lock them in. (This is currently not explained in the current build but will be added soon.)

There are a lot of things I still want to add and change but as a solo dev I will have to prioritize what gets tackled first!

Some of the feature to come:

This is a EARLY ACCESS TEST BUILD. I ask that you please give me any feedback that you have about the game.

Is it hard? It is easy? How are the enemies balanced? What would be a good addition? Are there any glitches? All the feedback I get will help further development of the game.

This game is exclusively being made with assets found here on itch.io and I feel its a good way to not only support the community but also showcase some awesome assets that I have found.

I pay for every asset that I use as a way to give back to the itch.io community and will continue to purchase and use more assets. The game currently has assets from 14 different artists. I hope that everyone will enjoy this game and I can continue adding dozens of new enemies and levels.

If you enjoy this project and want to help support the development of this game consider donating .

Thank you for coming to check this out.

There will be some balance checks for these done soon. Have already played them for hours.

More likely to block your attacks. HP increased to better scale with the player.

No longer as agressive as it was. Might peck at you while on the ground though!

Fixed stats menu. Now confirms when stats are set.
Stat menu tell you what button to press for confirming stats and added a visual confirmation so you know it worked.

Audio - Different music now plays during the "reflex round"

Level design - I did spend some time making the levels look a little better. I like the changes and hope you will too.

Balance pass on the eye/bat enemy.

Fixed a bug allowing you to get hp when dead, and then killing you again.

Enemies are now less likely to spawn on top of you.

Enemies now know what walls are and turn around.

Camera view increased to see more of the level.

Endurance mode is still not active.

Endurance - Mode is added to the main menu but is not active.

Survival - The mode people have come to know and love/hate.

Some graphical fixes. More to come.

Changed controls in options to only display keyboard controls if a controller is not connected.

E - Used to enter in-game menu to use stat points.

Player knockback fix for bush enemy - will not get knocked back as far.

Was meant to ask now - when I purchase this, can I make an extra special request to have a Steam key please? Thanks!

Thanks for your great work. I have been learning how to program and it would take me so much time to do everything by myself. 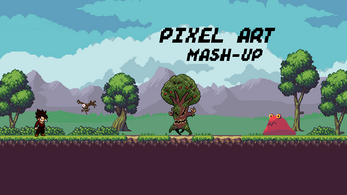